Preach What You Practice: Charles Murray on Our New Class Divide: Coming Apart: The State of White America, 1960–2010, by Charles Murray

A Pakistani-born professor once told me how as a youngster he was lectured repeatedly on the importance of associating only with people of the “right” ethnic, family, or religious background. Shaking this curse had been one of his chief reasons for coming to the United States. But what did he find here? America’s bien-pensants busily embracing the very same set of obsessions. Ali Raza went on to become president of the National Association of Scholars’s California affiliate and a leading champion of the Civil Rights Initiative outlawing racial and ethnic preferences in the Golden State. He wanted nothing more to do with Pakistan’s caste consciousness.

There was a time in our history when multiculturalism wasn’t an aspiration but a predicament, a way station for migrants who hadn’t yet entirely traded old-world customs for new. Nor was it anything to brag about or strive to perpetuate. Indeed, the newcomer could, and usually did, expect his children to be second-to-none in their 100-percent Americanism. Yet despite its transitory, somewhat embarrassed character, this original multiculturalism made an important contribution to American self-consciousness. It reminded us as a people of the horrors we had historically left behind—via the living witness of those who had more recently escaped: the Irish from famines; the Germans, Poles, and Russians from autocracy; the Jews from pogroms. Each informed the native, with accented eloquence, why his American birth had been such a blessing.

The freshly arrived still sing these paeans, but their melody is drowned in the carping choruses that roll down from the cultural heights. And this is not just an American phenomenon. The rest of the Western world, raised in affluence and following America to the status of migrant Mecca, has also heard its anthems fade, its intellectual choristers, for reasons of business and pleasure, preferring dirges to hosannas. Traditional multicultural wisdom, hard-earned by those seeking better lives in better lands, is badly in need of renewed audience. But street songs and singers will no longer suffice—postmoderns have little patience with the non-transgressive lowly. To be heard today it must convey more than proletarian robustness. It must show a cultivation that can command the attention of the “sophisticates” who, in turn, command so much of the rest of American opinion.

There are such voices, one of the most arresting being that of Ibn Warraq, the pen name of another Pakistani émigré whose latest book, straightforwardly titled Why the West Is Best: A Muslim Apostate’s Defense of Liberal Democracy, has recently appeared. Warraq is probably best known for Why I Am Not a Muslim (1995), which forced him into a semi-underground existence. His subsequent Defending the West: A Criticism of Edward Said’s Orientalism (2007)—a powerful apologia for how Western scholars and art historians treated and in many respects recovered  the heritage of Islam and India—was a memorable display of connoisseurship and learning, especially notable for its brilliant defense of the nineteenth-century’s “Orientalist” painters.

The opening chapter of Why the West Is Best, a tribute to New York City as vibrant microcosm of the West’s (and particularly America’s) vigor, variety, tolerance, and creativity, is the book’s crown jewel. Warraq’s adopted home is celebrated not just as a center of finance and culture, both high and hip, but of a boosterism that echoed the gratitude of those who capitalized on New York’s abundant opportunities. Multiculturalism’s most golden melodies are quite literally recalled as we stroll with Warraq down Tin Pan Alley, originally a row of small office buildings on 28th Street between Fifth and Sixth Avenues. Not just a business hub for tunesmiths, it was a place inspiring hymns to the American dream by a series of immigrant, or son-of-immigrant geniuses—Irving Berlin, Jerome Kern, the Gershwin brothers, Lorentz Hart—who had found their own dreams fulfilled there. It was where Berlin heard his mother calling God’s blessings down on America and turned that prayer into a lusty patriotic ode, and George Gershwin conceived Rhapsody in Blue (in his own words) as “a sort of musical kaleidoscope of America, our vast melting pot, of our unduplicated national pep, of our blues, our metropolitan madness,” and Hart composed his alchemic eulogy to the grimy life of the Lower East Side, where a nonpareil Mott Street becomes graced by “sweet pushcarts gently gliding by.”

Yet, it’s not just New York’s effervescing pride that makes it, in Warraq’s eyes, emblematic of America and the West. Equally defining is its rollicking sense of humor. And not only back in the vaudevillian days of the Marx brothers and Burns and Allen, but in the numerous comedy clubs that dot today’s city. If self-criticism is a society’s way of staying sane, the comedian serves as its therapist, insofar at least as that humor is directed inward, as New York’s typically has been, especially in its renowned ethnic jokes. “Any civilization that cannot laugh at itself is in a state of decline, and it is dangerous,” Warraq warns, recalling the Ayatollah Khomeini’s declaration that “there are no jokes in Islam.” (Though surely there must be in Persia.) Gotham may have its bears and bulls, but nary (pre-Bloomberg at least) a sacred cow.

Warraq finds a counterpoint to New York’s boisterous individualism in its sober sense of cultural stewardship, to which many imposing municipal monuments, erected through far-seeing philanthropy, attest. One of these, the New York Public Library’s Beaux-Arts edifice on 42nd Street, is lovingly described, not only for its architectural magnificence, but for its symbolic status as universal temple of learning, collecting documents, books, and users from the four corners of the world—open, like the civilization for which it stands, to the contributions of all mankind.

The chapter also conjures the city’s everyday charms, its potpourri of ethnic neighborhoods with their delicacies, fragrances, and fashions, and its bookshops and magazine stalls, so densely crammed that an Iraqi visitor once breathlessly snapped photos of them, certain his friends wouldn’t otherwise believe such a wealth of reading matter could be publicly available. Coming from a country where liquor is officially restricted, Warraq even salutes the city’s bars, particularly its smarter ones, like Grand Central Terminal’s “Campbell Apartment,” where alcohol can be openly enjoyed in a setting simultaneously bustling and elegant. Here, once more, sounds the voice of that wiser multiculturalism recognizing what it has gained, even in small comforts, by coming west.

Subsequent chapters cover more familiar ground: one explains what the West owes to Greek reason, Roman law, the Judeo-Christian tradition, science, and the bourgeois virtues; another reminds us that the crimes for which the West is endlessly indicted—slavery, racism, sexism, and imperialism—have been committed worldwide with far less remorse; yet another reveals the true state of family values in the Middle East, far behind the West in its treatment of women and children, and not at all exemplary when it comes to drugs and alcohol. While much of this has been said before, it has rarely been said as well, and with a uniquely individualized take borne of the author’s defection from Islam and embrace of secularist rationalism.

Warraq is scathing about those who out of “sensitivity” or simple cowardice fail to stand up for freedom of conscience and speech against Islamist terror—like diplomats or reporters who talk hazily of “sectarian violence” when Moslem fanatics are murdering Christians in Egypt or Nigeria, or Secretary of State Clinton who recently retreated from a defense of “freedom of religion” in Moslem countries to mere “freedom of worship,” conceding thereby the right to criticize, convert, and apostatize. Even deeper is Warraq’s disdain for the spinelessness shown by Westerners in the face of attacks on their own citizens or on the constitutions and core ideals of their homelands—as in the Rushdie case or the Muhammad cartoon affair or, most wretchedly, the Netherland’s “hate speech” prosecution (ultimately dropped) of politician Geert Wilders for his film Fitna, which linked acts of violence to the incitements of Muslim preachers drawing upon the Koran’s more incendiary verses.

Warraq sees in Islam the antithesis of all he admires about the West, a kind of ur-totalitarianism (and true successor to Communism) that would, if it could, bury modernity’s luxuriant verdure under the desert’s sterile sands—a view understandable in light of his biography, and based on far more knowledge of the faith than I, or all but a handful of Westerners, possess. Still, when dealing with Islam, Why the West Is Best occasionally seems to take on a Manichean tone. Islam, like the West, is a civilization, and like all civilizations has many parts in motion. There is no high command or agreed upon marching orders for its devotees, and there are certainly dissenting voices, some of which Warraq quotes and hails. One suspects that Warraq, first and foremost a freethinking son of the Enlightenment, believes that the transformation the Middle East requires must come through a marginalization, rather than a tempering, of Islam, or that a tempering can only come through marginalization. That certainly hasn’t worked in the West, where the marginalization of Christianity has been followed in very short order by the collapse of cohesion and confidence. Warraq would surely reply that Islam and Christianity are vastly different, and undoubtedly they are. But it was not so long ago in “civilizational time” that Christianity was widely berated, as Islam is now, as a backward, suffocating dogma, and in “new atheist” circles continues to be. The way forward for the Middle East is probably not toward irreligion, but reasonable belief.

Warraq closes by outlining strategy for the West’s defense. Some of it very sensibly draws on the experience of the “Old Cold War,” particularly the effort to pierce the Iron Curtain with a barrage of ideas. His “New Cold War Translation Project”—noting the paucity of Western books in Arabic and the near absence of books that bring serious Western scholarship to bear on Islamic theology and history—urges a concerted effort at developing and disseminating such a library, which would include Islam’s forgotten classics of skepticism and rationalism from Omar Khayyám to Averroes. Warraq also pleads for cutting the tether of dependency, teaching Islamic and African nations “to take more responsibility for their own plight,” and doing something about an “inefficient and corrupt” United Nations that has “become the foul center of anti-American and anti-Western hatred.”

But most of all Warraq appeals to us to confront what he rightly regards as the root cause of Western weakness, the self-hatred of Western intellectuals manifest in the adversarial nature of so much of what now passes for education. There is, to be sure, some rationalist innocence in the idea that merely reiterating what should have long been obvious—the comparative blessedness of the Western dispensation—will change minds. If that’s so, shouldn’t the facts have already spoken for themselves? Yes, reiteration is required, again and again if need be, with all the intellectual ingenuity and eloquence we can muster, but there are problematic aspects of the organization of Western intellectual life, particularly its sealed and self-serving qualities in academe, that must be addressed structurally if any recovery of cultural self-esteem is to occur. Argument and the marshalling of the most “self-evident of facts” won’t, by themselves, be enough.

That said, Why the West Is Best is a compelling, and readable brief, whose multicultural authority is of the very best kind. Ibn Warraq knows what he’s gained. He wants us to recognize what we have to lose.

Leaving the Land of Digital Natives

Journalist and editor Camilo Jimenéz explains that he resigned from teaching because the vast majority of his privileged, private school-educated students could not compose a single error-free paragraph properly summarizing a longer text.

Peter discusses twenty-one new books for your attention, and has a few you should avoid. ... 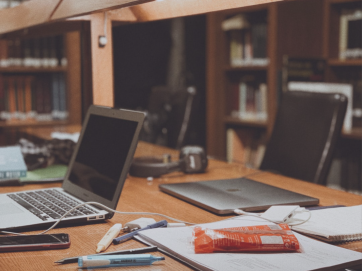