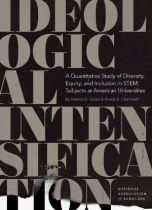 This report documents and quantifies the growing prevalence of Diversity, Equity, and Inclusion (DEI) associated language in science, technology, engineering, and mathematics (STEM) fields in the United States. For this study, five new datasets were assembled—comprising over 30 GB of data in over 280,000 files—focusing on American university webpages, university Twitter accounts, annual programs of academic associations, grants of major scientific research funders, and publications of scientific research, making this the largest study to date of DEI ideology’s intensification in STEM fields.

In recent years, Diversity, Equity, and Inclusion (DEI) ideology has spread aggressively throughout institutions of higher education in the United States and throughout the Western world. Arising from within the humanities and social sciences, DEI has begun to influence the natural sciences.

The spread of DEI has torn through barriers established to protect students and professors from ideological intrusion into their learning and research. By systemically dismantling academic freedom and reorienting the mission of America's universities, DEI’s followers have established themselves as the preeminent ideologues on America’s college campuses today.

This rapid and radical transformation of the American academy has left many outside these institutions bewildered. In an attempt to document the natural sciences’ conversion from seeking truth to forwarding political objectives, the National Association of Scholars commissioned this study, Ideological Intensification.

The Anatomy of a Diversity Equity and Inclusion Takeover