The most notable intellectual debate of recent times centered on an essay stating that the fall of Communism revealed a world divided into seven or eight distinct civilizations—“differentiated from each other by history, language, culture, tradition, and most important, religion”—that would often be in conflict in the future. Even a rudimentary knowledge of the past might have made that argument seem reasonably acceptable, but Samuel P. Huntington’s 1993 Foreign Affairs article, “The Clash of Civilizations?” was received as a slap in the face by many. People of the West, both liberal and conservative, had become accustomed to thinking of their way of life as constituting the ultimate in human progress—aspired to and desired by the entire world. They had been encouraged in this view by a perhaps naïve understanding of Francis Fukuyama’s The End of History and the Last Man, which had appeared the year before Huntington’s piece and ignited a huge debate of its own.

Fukuyama argued that Western-style liberal democracy was likely the last stage in the socio-political development of mankind and that no important conflicts over what kind of regime is best would interrupt its gradual and inevitable diffusion. Huntington, however, openly repudiated any thought of the West as a “universal civilization” that “fits all men,” in the words of novelist V.S. Naipaul, Nobel laureate and Trinidadian immigrant to the United Kingdom. According to Huntington,

Western ideas of individualism, liberalism, constitutionalism, human rights, equality, liberty, the rule of law, democracy, free markets, the separation of church and state, often have little resonance in Islamic, Confucian, Japanese, Hindu, Buddhist or Orthodox cultures….The very notion that there could be a “universal civilization” is a Western idea, directly at odds with the particularism of most Asian societies and their emphasis on what distinguishes one people from another. Indeed, the author of a review of 100 comparative studies of values in different societies concluded that “the values that are most important in the West are least important worldwide.”1

Huntington cautioned that so far from seeing the inevitable spread of Western ideas on a globe full of people just like ourselves, the West would have to labor with care to maintain its own “civilizational identity” in this newly reconstituted world order.

Thus, as we turn more particularly to our own purview of higher education, a study by the National Association of Scholars released last year looms as ominously important. The Vanishing West: 1964–2010, documents a sharp decline in the survey courses in “Western Civilization” that were once mandatory in many American colleges. “This course,” the report explains, “covering classical antiquity to the present, was once part of the undergraduate curriculum’s intellectual bedrock, not only because it was often a graduation requirement, but because it gave narrative coherence to everything else the university taught.”2 But only one of the 125 colleges studied still insists on such a requirement.

According to an article on the study in Inside Higher Ed, “Historians and curriculum researchers attribute the de-emphasis on Western Civilization courses to significant changes in higher education curriculums, student diversity, university educational goals, and how history researchers study the world and receive training.”3 All of which comes down to one word, of course—multiculturalism, and the rise thereof. Indeed, Anthony Grafton, outgoing president of the American Historical Association and a professor at Princeton University, blandly attributed some of the decline in the Western survey to demographic change. In the paraphrase of the Higher Ed reporter, Grafton declared that such a course “was especially well suited for the student population of the 1960s. But he said today’s student body is radically different and might not be as interested in such courses.”4

Really. Demographically different students are not interested in such courses. So much for the universality of the West, I guess, even within our own borders, let alone across the globe.

But whether they are Huntingtonian or Fukayaman in tendency, all this cannot but properly alarm Academic Questions readers, who will appreciate that our special section in this issue is devoted to “Why Study the West” and gives damn good reasons for doing so.

“The Razor’s Edge” of Robin Fox’s title is where he believes liberal democratic societies are poised, for though we regard such societies “as the natural outcome of natural human impulses,” they are really “dangerously late arrivers on the human scene and, to be brutal, they are still fragile experiments whose viability has not been sufficiently tested. Far from being natural outcomes of human nature,” writes Fox, Rutgers University professor and founder of its anthropology department, “they are heroic attempts to defy human nature.” Memorably evoking his own “socialization into Western culture in a northern provincial town in the England of the 1930s through the 1950s,” Fox (who has been engaged in a friendly, long-running debate with Francis Fukuyama) emphasizes the importance of teaching Western culture in its particularity and uniqueness, while still maintaining its invigorating openness.

Not surprising for the former dean and longest serving tutor of St. John’s College in Annapolis, Eva Brann sees the primacy of texts in education. In her deeply thoughtful essay, “The Great Tradition,” Brann details four reasons for teaching the tradition via the great books of the West: because the civilization they embody is ours, and also a predicate for studying others; because it is both grand and accessible; because it is dialectical, thriving on conversation, engagement, and argumentation; and because it is, for better or worse, all-potent at the present moment.

In “Our Western Heritage: An Interview with Robert George,” we find one Princeton professor who unequivocally proclaims the extraordinary “intellectual, moral, religious, political, economic, scientific, technological, artistic, architectural, and literary achievements of the West”; is not afraid to pitch Plato and Aristotle against Charlie Sheen and Lady Gaga to his students; and insists on the importance of self-mastery gained through proper study of the liberal arts as the fulfillment of one’s humanity and prerequisite for the continuation of democratic self-government.

“Metamorphosis,” by NAS chairman and AQ editor-in-chief Stephen H. Balch, first appeared at a website with the rather misleadingly informal name Pajamas Media, but is well-worth our reprinting, inasmuch as it boldly counts the metamorphosing, transforming innovations of the West as unequaled in human history, except by the emergence of our species itself and by the development of agriculture. We must impart to American students a sense that “Western civilization constitutes a distinct legacy within the overall human heritage,” or else, Balch cautions, “they are unlikely to feel a…sense of attachment or be ready to rise to its defense.”

Toby E. Huff of Harvard University expounds in “Law and Science” how specific legal developments of the late twelfth and early thirteenth centuries were unique to the West and led to the promotion of political stability and economic growth as well as to the rise of modern science. These centuries saw innovations “in three major spheres of societal development: the emergence of representative democratic politics, the creation of new economic rights and actors (corporate entities of many sorts), and scientific development.”

In “A Civilization of Explorers,” Ricardo Duchesne, University of New Brunswick professor and author of The Uniqueness of Western Civilization (Brill, 2011), is unapologetic about the aspirational, expansionist, competitive, creative, disruptive, individualist aspects of the Western character that have produced a distinctive and powerful culture.

The West, of course, has ever been heartily interested in what is now called “the other,” and indeed diligently studied many “others” before anyone thought to call them that. Both Samuel Huntington and the authors of The Vanishing West emphasize the importance of acquaintance with the major non-Western civilizational identities of today, and so we present our subsection: “Why Study Islam, India, and China.”

University of Maryland professor emeritus Charles E. Butterworth details the riches of “Islam as a Civilization,” while in a more contemporary vein Kevin D. Williamson, deputy managing editor of National Review, provocatively proposes Indian prime minister Dr. Manmohan Singh as “The New Leader of the Free World.” Williamson argues that we need “to know something about the civilization that produced him and the society that made possible the remarkable economic and social reforms with which he is associated.”

Philip F. Williams of Montana State University gives a helpful grounding in the important works and central values of the two great civilizations, China and India, which are chief among the regions of “Monsoon Asia.” And in his unusual “Lessons from the Empire of Writing,” Cordell D. K. Yee, Eva Brann’s colleague at St. John’s, offers an illustrated lesson in how calligraphy is key to understanding China. All of the articles in this section contain suggestions for teaching and further reading.

This issue also contains several articles outside of our civilizational interests which nevertheless purvey traditional scholarly virtues. In “The Wealth of Nations and the Poverty of Analysts,” eminent sociologist Irving Louis Horowitz details how the pronouncements of some prominent social scientists about the Libya of Muammar Gaddafi were tainted by their acceptance of financial remuneration and failure to disclose that fact up-front. And in “The Contradictions of Contemporary Culture: A Tribute to Norman Jay Levitt (1943–2009),” Paul R. Gross, University of Virginia professor and former provost and vice-president, lauds the intellectual energy of the man with whom he co-authored the seminal exposé of the infestation of science by political correctness: Higher Superstition: The Academic Left and Its Quarrels with Science (Johns Hopkins University Press, 1994).

The poems in this issue are by Ernest Hilbert, poet, antiquarian book dealer, and host of a popular blog and video show.

Books under review include the anonymous Professor X’s In the Basement of the Ivory Tower: Confessions of an Accidental Academic, which NAS president and AQ editor Peter Wood finds to be “among the most authentic and best-realized first person accounts we have had so far of ordinary American higher education.” And Baylor University professor Elizabeth Corey takes issue with Naomi Schaefer Riley’s brief against tenure, The Faculty Lounges: And Other Reasons Why You Won’t Get the College Education You Pay For.

And for something unusual in our pages, a poet reviews a poet. Middlebury College professor Gary Margolis, whose poems have appeared in AQ, is a former student and longtime friend of Robert Pack, our retiring poetry editor. In his review of Pack’s latest volume, Laughter Before Sleep, Margolis warmly appreciates how the older poet is “still able to offer himself to the love that the Universe contains.”

Our Books, Articles, and Items of Academic Interest feature for this issue is “Conservatism under Academic Scrutiny,” written by Gerald Russello, editor of The University Bookman, who reports that conservatives and conservatism have become a legitimate area of scholarly inquiry, and, inevitably, of un-scholarly myopia.

A perfect complement to our themes in this issue is artist and art critic Maureen Mullarkey’s evocative collage, “Every Text, Its Time,” a tribute to the beauty, tangibility, and permanence of books. The image can be seen in full color on www.springerlink.com, available to NAS members and AQ subscribers. 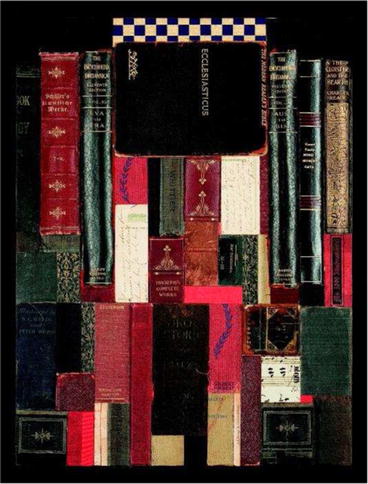 The Love That We Bear: Laughter Before Sleep, by Robert Pack