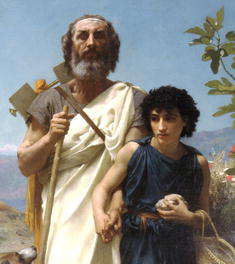 If you had seen blind Homer with his harp,
on Chios maybe, on a dusty street
crowded with chariots and heavy carts,
busy and difficult to cross, you would
have given him your arm and told him: “Master,
hold on. I’ll see you to the other side.”
When there you’d find him some place in the shade
to sit, and call the water carrier for
a cup to wet his mouth. You would not seek
reward—except perhaps to say to him:
“Master, could you recite a line or two
so I may tell my children that I heard
the magic from your lips?” And he would ask:
“Which lines my child?” and you would have replied:
“Sing me the story of Achilles’ grief
over the death of his most precious friend.”
So, plucking at his harp strings he would sing:

A black grief struck Achilles; with both hands
He poured the dust and dark ash on his head
Defiling his fresh tunic and fair face.
The mightiest of the mighty, in the dirt
Outstretched upon the ground, tore at his hair.

Wiping your tears you’d ask again: “O Master,
in dreams I’ve seen Patroclus lying there,
slaughtered by Hector in Achilles’ stead.
What were the lines about the funeral pyre?”
And, pausing for a moment, he would sing:

Achilles like a father robbed by death
Of his own new-wed son, wailed for his friend.
He burned the bones and paced with heavy tread
And ceaseless groans around the funeral pyre.

“The greatness of Achilles” you would say,
“was never greater than the moment of
his grieving for the friend who died for him.”
You’d weep and bow your head, but through your tears
you’d hear the poet, soft in recitation,
saying the words Patroclus, in rebuke,
hurled at Achilles sulking in his tent
while the Achaeans bled beneath Troy’s walls.

Who was your father, you who have no pity?
No, not the master horseman Peleus;
Nor was your mother Thetis. The gray sea
Spawned you on the cliffs, inflexible man!

And when you looked up, he’d be gone, and you
left wondering if you’d wakened from a dream.

Tell Me No Lies?

Defining White Supremacy Up . . . and Academic Freedom Down

An attack on three acclaimed scholars by two progressive authors reveals a broader effort to marginalize liberal values, including academic freedom, which the authors contend are crucial com......