Since the seventeenth century, there have been two narratives about modernity in general and America in particular. I use the term “narrative” to include (a) facts, (b) arguments, and most important, (c) a larger vision of how one sees the world and chooses to engage the world. Public policy debates revolve around how one chooses to identify potential problems and solutions. To be sure, narratives appeal to facts and arguments but they also inevitably reflect fundamental commitments and choices about how one engages the world. That is why public policy debates cannot be resolved simply by appeal to objective facts.

What then are the two narratives? The first and originalist narrative is the Lockean Liberty narrative. Lockeans endorse the technological project (TP), transformation of nature for human betterment. They understand that the project is best carried out in a free market economy (FME) in which (à la Adam Smith) private property releases the imaginative ability of as many people as possible; that a free market economy requires limited government (limited to providing the legal machinery to protect negative rights, enforce contracts, and dispute resolution), and wherein liberty is understood as restraining government on behalf of individuals’ private interests; that the rule of law must be focused on restraining government power by its emphasis on due process and the recognition that economic planning is incompatible with the rule of law (Hayek). Finally, they favor a culture of personal autonomy within which individuals pursue happiness and are not overruled by a collectivist good. Equality for Lockeans means equality of opportunity and equality before the law. Economic inequality is inevitable but unproblematic in a growth economy (TP+FME) wherein “a rising tide raises all boats.”

The second and adversarial narrative is the Rousseau/Marx equality narrative. Rousseaueans reject the technological project (extreme environmentalists), but Marxists and socialists accept it. Nevertheless, both Rousseaueans and Marxists attribute all social problems to the market economy that accompanies the TP. The entire Lockean worldview is illegitimate because it institutionalized inequality by letting everyone keep his original possessions in the first social contract. That is why we must start over with a new dispensation in which the original position, as John Rawls argues, is a radical egalitarianism. Rousseaueans cannot negotiate with Lockeans in good faith because the present context is illegitimate. Moreover, the economy must be heavily regulated to promote equality of outcome even in a global context. America is likened to the original rich and powerful who imposed the original agreement on the weak. Rather than limited government we need a collectivist, all-encompassing good—a general will to which individuals are subordinated. Everyone has positive rights, which means that you can have liberty only when the government provides you with the resources, through redistribution of wealth, to achieve your goal. The legal system does not restrain government, but is the faithful servant of the general will. Finally. Each citizen gives up individual identity in return for the achievement of happiness by serving the greater collective good instead of individually pursuing happiness. There will be equality of outcome. To be sure, there will be inequalities of function or status, but somehow this will not cause resentment.

“Democracy” means something different in each narrative. For Lockeans, following Madison in Federalist No. 10, democracy is a negative or blocking device. There will always be a plurality of competing interests in a market economy; in order to prevent one economic interest from dominating, a majority of the other interests can restrict or block the hegemony of that interest. What the majority wants is not necessarily good; what the majority opposes is probably bad. As John Stuart Mill pointed out (following Tocqueville—both are obviously Lockeans) the term “democracy” meant in the eighteenth century a protection from government tyranny; in the nineteenth century following Rousseau, “democracy” acquired a positive function—namely, a consensus on the common good understood as the collectivist general will. Lockeans worry about the tyranny of the majority and try to protect the rights of all individuals through constitutional guarantees; Rousseaueans have no need for such a constitution.

Education has a completely different meaning for each narrative. For Lockeans, educational institutions should be private, competitive, and market-sensitive. The purpose of education is to develop individual freedom, responsibility, initiative, and imagination. For Rousseaueans, educational institutions must be government controlled and designed to produce equal and willing publicly-minded citizens.

Given what has been said above, it should be obvious that Obama’s commission that formulated A Crucible Moment: College Learning & Democracy’s Future, with its emphasis on democracy, inequality, and globalization, fashioned a Rousseauean document.1 In the present context, the academy (collective of all institutions of post-secondary education—I hesitate to say “higher” education) is totally dominated by Rousseaueans whose influence thereby extends to all other institutions, especially the media, which defines the context of public policy debate. The president’s commission envisions a world in which all will be indoctrinated with the Rousseauean viewpoint.

The university is at present the commanding heights, and it is in the hands of the enemy.

The Cultivation of Racism 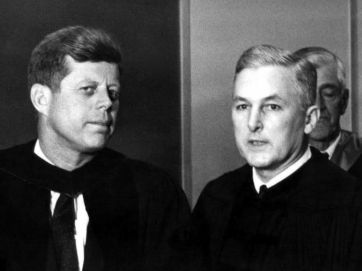