Numerous studies have shown the severe lack of ideological diversity in universities across the U.S., with the vast majority of faculty leaning left of center.1 Despite the marginal representation of non-liberal viewpoints in the academy, the degree of institutional protection granted to intellectual minorities in universities has been scarcely studied. This article will report on the findings of a content analysis of mission, diversity, and nondiscrimination statements of elite U.S. universities for the presence of demographic and intellectual diversity themes. The most salient result is that only 14 percent of the studied universities explicitly protect viewpoint diversity in their nondiscrimination statements while most demographic types of diversity receive almost unanimous protection.

The term diversity refers to the condition of having or being composed of different elements. Demographic diversity denotes variety within a group in terms of factors such as ethnicity, race, gender, sexual orientation, immigration status, or nationality.2 Intellectual diversity refers to variation within a group in terms of viewpoints, moral codes, ideas, preferences, beliefs, perspectives, or political opinion. Religion straddles both categories of diversity, being at once a type of demographic identity about places and customs as well as a belief system influencing ideology. This analysis will only address viewpoint diversity in its secular forms and treat religion as a subtype of demographic diversity.

Viewpoint diversity in organizational contexts has generally been associated with beneficial outcomes, due to its effect in increasing the set of intellectual tools available to find innovative solutions to complex problems.3 Politically polarized editorial teams, for instance, have been shown to produce higher quality Wikipedia articles on politics, social issues, and science topics than politically homogeneous teams.4 The benefits of viewpoint heterogeneity have also been shown to be more consistent and pronounced than those of demographic diversity.5

Viewpoint homogeneity might be beneficial for communities whose primary purpose is internal social cohesion, but it is detrimental for enterprises of exploratory nature such as scientific research and tertiary education. The scientific method requires rigorous inspection of competing hypotheses and the identification of a field’s blind spots. Intellectually heterogeneous fields are more likely to provide fair intellectual scrutiny of competing evidence and identify methodological errors stemming from ideologically motivated cognitive biases. In the educational arena, viewpoint variety among teaching faculty is essential for students to be exposed to divergent perspectives so they can learn to critically evaluate the merits of different ideas on their own.

Arguably, one of the largest contributors to viewpoint variance among humans is political orientation, since political beliefs closely align with an individual’s views on a large array of policy and moral issues.6 Thus, the ideological composition of college faculty can serve as a valid proxy to gauge the degree of viewpoint diversity in the academy. Two main methods have been used in the past to empirically study the political orientation of faculty in U.S. universities: voter registration studies and faculty surveys about ideological values. Meta-reviews of voter registration studies about faculty partisan affiliations have shown that most academic fields are highly skewed towards large Democrat to Republican ratios (D:R).7 Ideological surveys of university faculty have also found D:R ratios consistently above 10:1 D:R.8

Institutional statements represent a useful source of data for gaining a glimpse into a university’s perspective on matters of purpose and aspirations, and they often reveal hidden assumptions and power structures at play within the institution.9 In this work, we carried out a content analysis of three widely prevalent university institutional statements: mission, diversity and nondiscrimination statements.

A university mission statement delineates the university’s scope of operations and reason for existence. The mission statement communicates primarily to students, staff, and the wider community a shared understanding of the organization's intended direction and suggests guidelines to employees when making decisions.

A university diversity statement helps the organization develop goals about how to use diversity to shape or strengthen the institutional environment. It also informs relevant stakeholders and the public at large about the role diversity plays in the university. Given the exclusionary nature of elite colleges and universities, diversity statements serve the role of a crucial public relations instrument.

Between February and March of 2017, the authors collected the mission, diversity and nondiscrimination statements of fifty elite universities in the U.S. as ranked by US News University Ranking Charts, 2017. To analyze the content of the gathered institutional statements, we used an emergent coding technique where the themes and categories to be searched in the statements were established following preliminary examination of the data by the authors. Subsequently, three human raters examined each statement and binary coded the presence of diversity related themes into three tables, one for each type of statement: mission, diversity and nondiscrimination. We found high levels of interrater agreement on this task (Fleiss kappa=0.83). A detailed description of the methods used for coding the statements content is available as supplementary material.10 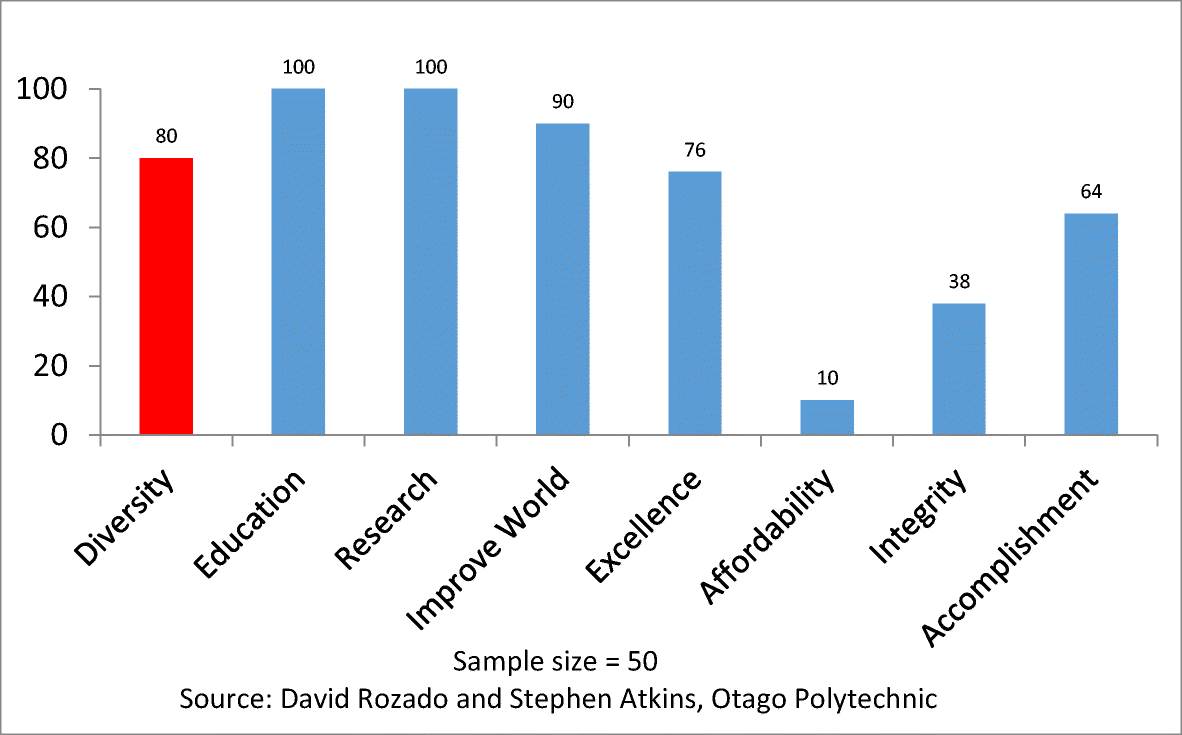 Archetypical categories of demographic diversity such as race, sex, sexual orientation, gender identity/expression, or ethnicity are fairly prevalent in diversity statements (Figure 3). Interestingly, explicit references to the desire of the institution to promote or embrace viewpoint diversity was the most cited type of diversity, appearing in 88 percent of the diversity statements studied. 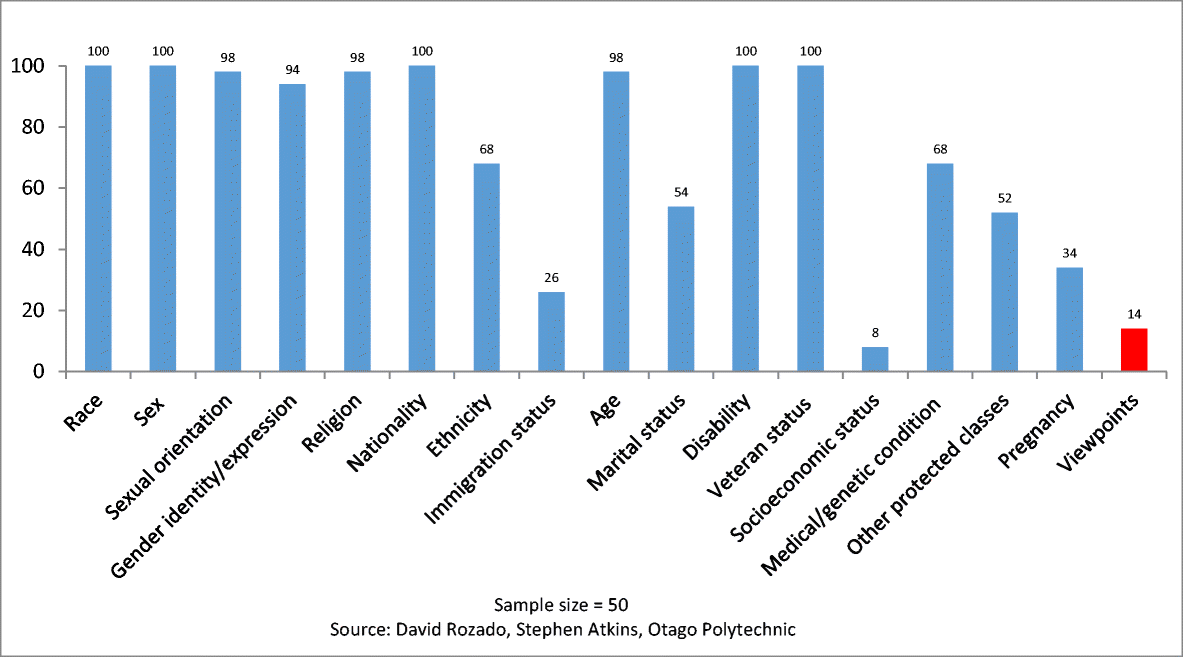 The themes and features contained in institutional statements probably reflect the standpoint of those doing the writing—in the case of universities, faculty and university administrators. This raises the question of whether the absence of viewpoint diversity protection in nondiscrimination statements is due to latent hostility from the ideological majority toward nonconforming viewpoint minorities, a not uncommon phenomena in intellectually homogenous groups. Less likely, but still imaginable, perhaps university faculty and administrators simply believe that intellectual diversity is not an important enabler of a university mission, and that therefore, intellectual minorities do not require the same degree of protection that demographic minorities receive.

We can conceive of several criticisms regarding our work. First, it could be argued that institutional nondiscrimination statements are simply fixated on complying with federal laws as well as additional ordinances at the state level which specifically forbid discrimination for a number of protected classes, usually demographic subtypes of diversity such as race, gender or ethnicity. Political affiliation or belief is not considered a protected class under federal law, albeit a few states and jurisdictions do protect it (e.g. California, D.C., and New York). However, as of the writing of this paper, there is also no federal law in the United States protecting individuals against discrimination on the basis of sexual orientation or gender identity. A few states provide protection against employment discrimination for those groups, yet thirty U.S. states do not explicitly include sexual orientation and gender identity in their antidiscrimination statutes. Still, most of the studied universities have overwhelmingly chosen to provide protection for sexual orientation and gender identity in their nondiscrimination statements, despite not being required to do so by law (Figure 4). Hence, a minority group not being officially protected by federal or state law does not preclude its inclusion in nondiscrimination statements when universities judge that such groups deserve protection. Furthermore, even when not compelled by federal or state law, a minority of universities (14 percent) still chose to explicitly protect viewpoint diversity in their nondiscrimination statements, suggesting that at least some universities recognize a need for protecting underrepresented viewpoints in the Academy.

An argument could be made that institutional statements are not a valid source for analysis since they are filled with vague platitudes that attempt to please a large variety of stakeholders with little actual consequence. Additionally, it is not prudent to state definitively that an institution does not protect viewpoint diversity just because their nondiscrimination statements are bereft of explicit language indicating that they do. Actions may confirm or refute the content of the nondiscrimination statement. It is true that mission and nondiscrimination statements, which are required by accreditation agencies and federal law, serve a normative role. However, institutional statements also serve a utilitarian purpose by signalling institutional beliefs, communicating with key stakeholders and protecting underrepresented groups. In that sense, they play a significant role in shaping institutional behavior and are therefore valid objects of analysis when studying the degree of protection offered by universities to demographic or intellectual minorities.

Critics could also point out that humans tend to discriminate more acutely against demographic categories of diversity such as race, sex, or nationality than against intellectual types of diversity such as beliefs or political opinion. We find this argument to be at odds with the historical record on discrimination against ideas, such as pervasive political repression and persecution of ideas within dictatorial regimes. Recent research illustrates the strong tendency of humans to discriminate in terms of viewpoints by showing how educational attainment is related to decreases in interethnic/interracial prejudice, but also to increases in ideological prejudice.11

It is conceivable that greater protection of minority viewpoints in the academy could embolden underrepresented intellectual factions, which in turn could lead to polarization and antagonistic relationships between viewpoint clusters. Yet, the empirical evidence on the performance of polarized teams, embodying diverse cognitive resources and perspectives, suggests that such groups, when facing a complex problem, produce ideas, solutions, and designs that outperform those from homogeneous groups. Therefore, it would be beneficial for educational institutions to encourage adversarial collaboration of intellectually heterogeneous teams while establishing systems that ensure dissent or debate can take place in a productive and amicable manner. Emphasizing within academic environments the importance of generosity of spirit, a sense of fair play, constructive disagreement, and humility could go a long way toward mitigating dysfunctional conflict.

Finally, it can also be contended that the lack of viewpoint diversity protection in nondiscrimination statements is due to universities’ reluctance to protect individuals or groups with extreme opinions, such as those justifying or inciting violence against other groups. We obviously do not endorse that universities should protect viewpoints that promote violence. Yet, this concern is inconsistent with universities attitudes towards religious diversity. Some extreme interpretations of religion can potentially lead certain followers to violent behavior against those they perceive as antagonists. Yet, the potential for occasional violent interpretation of religion does not prevent universities from overwhelmingly protecting religious diversity in their nondiscrimination statements.

The results of our work suggest an easy step for educational institutions to wholeheartedly signal their welcoming of intellectual diversity. Namely, proactive institutional protection of viewpoint diversity in their nondiscrimination statements would extend to this type of diversity the same degree of protection already provided to archetypical categories of demographic diversity. Such a policy would communicate to internal and external stakeholders a strong institutional commitment to prevent discrimination and harassment based on ideas. Universities’ explicit institutional protection of viewpoint diversity would signal to the large fraction of Americans who are either moderates, libertarians, or conservatives that their viewpoints are protected in universities with the same vigor already afforded to demographic minorities.

An academy where viewpoint diversity is explicitly protected would give students the educational benefit of being exposed to a wide variety of viewpoints, open up research possibilities on previously neglected politically/morally loaded topics, and improve the internal and external validity of research results. This, in turn, would foster a culture of vibrant inquiry where all members of the university community would feel free to speak up and challenge each other.

Critical Race Theory and the Will to Power

American colleges and universities have long dispensed with efforts to honor or commemorate Christopher Columbus. But according to Robert Carle, “most Americans know very little about......