Almost every assumption development specialists have made in......

Steven A. Camarota is the Director of Research at the Center for Immigration Studies; [email protected]

Few government policies can have as profound an impact on a nation as immigration. Large numbers of immigrants and their descendants necessarily have a significant effect on many aspects of life in their new country. One of the most important issues is the effect immigration may have on the economic well-being of the native-born or of immigrants already in the country. Historically, unions and other advocates for workers, such as Booker T. Washington, were very concerned about the effect immigration might have on labor. Common sense and basic economic theory certainly predicts that increasing the supply of workers lowers wages. Yet media outlets, commentators, and even some economists have argued in no uncertain terms that immigration has no negative impact on any American workers. In fact, the economic literature shows no such thing.

To be sure, immigration does not just create job competition. Among other things, immigrants are also consumers or owners of capital who can increase demand for labor. Nevertheless, there is ample evidence that some American workers, primarily at the bottom of the labor market, are negatively affected by immigration. Immigration is like just about every other public policy—some Americans win, others lose.

In the case of immigration, the evidence is reasonably clear that in addition to the immigrants themselves, among the winners are those who tend to be better educated and higher-paid workers. Among the reasons they tend to benefit is because they typically face less competition from immigrants and demand for their skills may rise when large numbers of less-skilled workers arrive. In contrast, the least-educated and lowest-paid workers often lose out partly because immigrants are often more numerous at the bottom of the labor market and because the demand for their labor does not grow as much with the arrival of immigrants.

Unfortunately, much of the commentary on this topic focuses on the assertion that the economic literature shows that immigration has no negative effect on the wages of any American workers. It is extremely common for politicians, opinion writers, and reporters to claim “virtually all” economists agree that immigration creates only winners, not losers. To be sure, there are some economists who say things like that, but that is not what the research shows.

We can all fall prey to confirmation bias, latching on to research that supports our preconceived notions while rejecting analysis that challenges them. But for many reporters, confirmation bias is an irresistible force. A good example is a piece by Adam Davidson in the New York Times Magazine early in the 2016 presidential campaign.1 Among the hyperbolic claims Davidson made is that because a study of the Mariel boatlift from Cuba in 1980 found little affect on wages in Miami, “it’s possible that we could absorb as many as 11 million immigrants annually” without having to worry about wage impacts. The Mariel study is certainly influential, but there are a number of long-standing criticisms of that study, which Davidson never mentions.

But the larger issue is that Davidson is an economics writer for a major publication who is supposed to have some appreciation for the complexity of the subject matter. Yet he ignores the substantial body of research that contradicts his desired conclusion. Instead, he asserts that a single study of just one city done decades earlier settled the question to such an extent that it potentially justifies a ten-fold increase in immigration. It is also worth adding that a few years after Davidson’s article, Harvard’s George Borjas, generally considered the leading immigration economist in the country, published a study inIndustrial and Labor Relations Review showing that if workers are separated by education, the Marielitos actually had a very large negative effect on the less-educated.2

While David’s piece is a blend of news and opinion, many supposedly pure news stories also portray immigration as creating only winners. A page-one story in the New York Times in 2017 typifies this type of coverage.3 The article, by Binyamin Appelbaum, does quote Borjas saying that immigration reduces wages for lower-skilled workers. But then turns to University of California economist Geovoni Peri to argue that the literature shows the affect on low-skilled workers is close to zero. In fact, Peri shows up in many news stories arguing immigration does not reduce wages.

But what is particularly striking about Appelbaum’s coverage of the issue is that while he discusses what is perhaps the most authoritative study on the economics of immigration—a 2016 report by the National Academies of Sciences, Engineering, and Medicine—he does not report the actual findings of that study.4 He instead relies on others to summarize it. A 2018 PBS story, which also mentioned that same study, does much the same thing and, like Appelbaum, also quotes Peri saying immigration has “not come at the cost either of American jobs, nor of American wages.”5 (Full disclosure: I was an outside reviewer for the Academy for that report.) Below is a table reproduced directly from that report. A negative numerical value in the Wage Effect column is an indication that the study found that immigration reduces wages for the group listed on the right-hand side of the table. 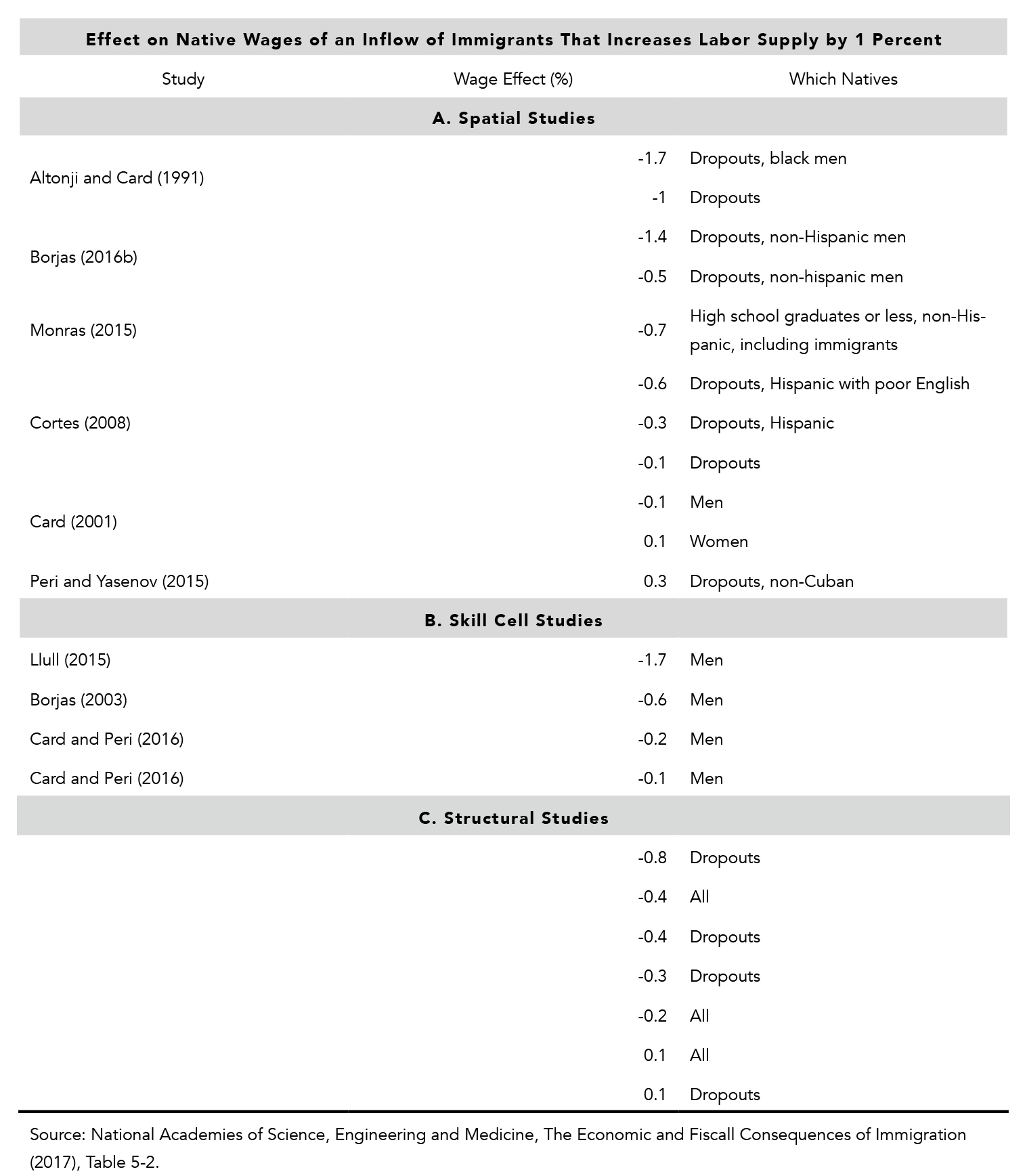 The table shows nine academic studies that find a negative impact from immigration on wages. Without going into too much detail, even a seemly low value like -.3 percent in the table means that each one percentage-point increase in the immigrant share of the relevant group of workers lowered wages by .3 percent. This is not a small effect when one considers that immigrants account for roughly 25 percent to 50 percent of a group such as high school dropouts during the time period covered by these studies. Immigrants were a much smaller share of workers in the rest of the labor market. So it is not surprising that the least educated are the workers most affected by immigration.

Of course, despite what the actual research shows, it may not be too surprising that a progressive news website like Vox would run a headline that reads, "There's no evidence that immigrants hurt any American workers."Or that a libertarian publication that favors as much immigration as possible, like Reason,would wrongly claim that George Borjas is "literally the only economist of any repute who questions the economic benefits of immigration."But it is disconcerting when a professional economist of high reputation grossly distorts the literature and sounds like an advocate. For example, Nobel Prize-winning economist Esther Duflo, who won for her research on developing economies, claimed that the aforementioned National Academies study found that, “the effect of low-skilled migration on low-skilled wages is zero."6 In light of what the above table shows, taken directly from that study, her statement is nonsense.

Since the National Academies study came out in 2016, a number of newer studies and reviews have found that immigration does reduce wages for some workers. Perhaps one of the more important is a large literature review by Anthony Edo, a French economist. He examined the findings of over fifty studies across numerous developed countries for the Journal of Economic Surveys. He found, not surprisingly, that the winners from immigration tend to be older and more skilled workers, while younger and less-skilled workers tend to lose. A 2020 paper from the National Bureau of Economic Research by Brigham Young University economist Joseph Price and several colleagues is also particularly interesting. It actually includes the very idea of winners and losers from immigration in its title: “The Winners and Losers of Immigration: Evidence from Linked Historical Data." The authors of that study followed individuals, not communities or skill groups, as is more typical in most studies. The study found that more educated Americans in the early twentieth century benefited from immigration while the less educated were harmed.

It is simply wrong to argue that economic research shows immigration has no negative effect on workers. It should go without saying that a negative effect from immigration on the wages of the least educated does not tell us what policy should be. There are many other issues to consider when it comes to immigration. For example, many Americans feel that one of the most important reasons to have a generous immigration system is that the immigrants themselves benefit by coming here.

Whatever one thinks about immigration, the negative effect it has on the income of low-skilled Americans, and immigrants already here, should at least be part of the discussion. Most Americans believe that we have some obligation to help or at least not make things worse for the working poor. It is why we provide billions of dollars a year in assistance to such workers. If the American people and policy-makers are to weigh the various effects of immigration, they need to have an accurate understanding of the tradeoffs involved. Unfortunately, when it comes to the wage issue, many in the media, and even some supposed experts, are providing a misleading picture of what the research actually shows.

4 A Consensus Report, The Economic and Fiscal Consequences of Immigration, National Academies of Science, Engineering, and Medicine (2017), https://www.nap.edu/catalog/23550/the-economic-and-fiscal-consequences-of-immigration

Almost every assumption development specialists have made in......

While “wokeness” attracts students starved for purpose and meaning, it fails to produce people whose excellent personal qualities are self-evident. Liberal education does just th......