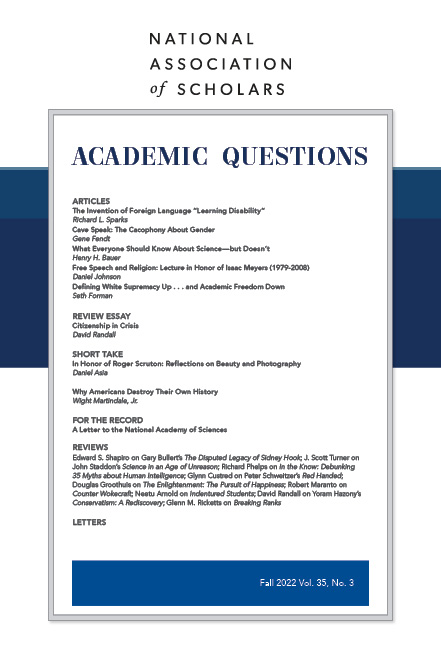 Recently I heard something I hoped I would never hear—a person I admire for his learning and discernment dismissing the liberal arts. A normally astute commentator in a televised pastoral ministry was advising young people about going to college. The liberal arts are a waste of time, he suddenly exclaimed (I’m paraphrasing); learn something practical that will give you skills, that will get you a job!

I was startled and dismayed and momentarily desolate.

Certainly this is not the first time that well-meaning people fed up with what higher education has largely become in our time have expressed such disdain. Now and again we’ve heard from Republican governors seeking to turn their public university systems away from the liberal arts, including the social sciences, toward more practical ends. When he ran the state of Florida a decade or so ago, Rick Scott proclaimed his desire to squeeze the liberal arts programs of funding in favor of STEM subjects. “You know what? [Students] need to get education in areas where they can get jobs,” he declared in an interview. “Is it a vital interest of the state to have more anthropologists,” he asked. “I don't think so.”

Aiming to oppose Scott’s position, Mother Jones inadvertently extended it by approvingly citing the Florida State University anthropology department website: “The Anthropology Department educates students about the lack of biological support for the race concept and challenges the racist ideas that have led to inequality and exploitation.”

“Hard to put a price tag on a lesson like that,” observed Mother Jones. It certainly is, since it’s costing us our country.

Yes, ossified social conventions like freedom of speech, the electoral college, the filibuster, the southern border, colorblind justice, the meaning of citizenship, and academic freedom.

Much disdain surfaced for what the liberal arts had become by the first decade of this century, but the newer opposition is even deeper since, with the pandemic and George Floyd riots of 2020, the veneer has been completely stripped off to reveal the extent of what academic theorizing has done to all levels of education. If at one time we thought it was a group of mandarin “experts” whispering absurd theories into the ears of teachers, we can see now that many of the teachers themselves have been graduated into this “expert” education and are imparting it to their pupils.

Perhaps, also, the reorientation even of STEM subjects, and of medical schools on top of that, toward diversity, equity, and inclusion as premium above merit, rigor, and excellence, has made such public figures as Charlie Kirk of Turning Point USA and Fox News host Tucker Carlson go even further than the television pastor, in suggesting that young people, especially young men, bypass college altogether in favor of vocational training.

Thankfully, a number of traditionalists have been roused to oppose this developing aspect of the conservative response to destructive progressivism in education. NAS president Peter Wood is among them and writes: “Abandoning academia due to the prominence of left-wing orthodoxy within it and the totalitarian means by which it is enforced abandons American institutions beyond college to those who hate America.”

So we do have a job. We must stand and fight for our precious legacy. “America needs non-academic skills to thrive,” Wood agrees,

but such skills are not all we need. We also must have a citizenry capable of seeing through lies and deception; understanding the principles of self-government and the pursuit of justice; and distinguishing between comfort and actual freedom. Acquiring technical skills is important but will not by itself empower citizens to argue for the natural rights of America’s founding documents against the ideas of socialism.

The liberal arts are vital to us personally, socially, culturally. It is the betrayal and subversion of the disciplines by their practitioners that has made them a problem. Notice that Mother Jones, even while defending anthropology as a viable subject of study, does not cite the great work that has been done by anthropologists such as Napoleon Chagnon and E.E. Evans-Pritchard and their outsized contributions to documenting and recording the story of man, but to the “morally satisfying” progressive ideology that the discipline has been hollowed out to promote.

Mass Third World immigration has also helped deplete our cultural legacy. In order to silence any concerns about the enormous influx of immigrants from many countries and cultures that followed the 1965 immigration act, America was defined as consisting solely of her ideas. The permanent habits, customs, institutions stemming from the Anglo-Protestant world gave way to the promotion of freedom and equality which were seen as universal and upon which all mankind could agree.   Some Americans who were themselves offspring of immigrants believed that the new immigration would turn out as the old, in good productive Americans like themselves and their families. And they seemed to think this would happen automatically, even while “multiculturalism” was being aggressively promoted as a new model for America through the decades following the 1965 act, troubling even to some left of center figures such as Arthur Schlesinger, Jr.

When John Fonte of the Hudson Institute and others participated in White House meetings during the Bush 43 years, and “raised the imperative of assimilating immigrants and teaching patriotism, our arguments were ignored,” he recalls. Certainly many recent immigrants and their families have indeed become good productive Americans, God bless them. But overall the newer immigration has helped bring about the balkanization and tribalization of the nation. Eventually, our cultural legacy was not only downplayed and bypassed, but actually reconceived as bigoted and shameful.

So defined, I suppose it can seem vaguely logical in some demented way that America must now fulfill Joe Biden’s plan to become a white minority country and spend her remaining substance on apologizing to and redressing the grievances of whatever segments of humanity have throughout history not been fully granted their share of these universal rights. John Adams, second president of the United States, once said:

Are we in a hypothetical fourth generation, in which the children have the right to deconstruct the work of the previous three and to smash the porcelain while they’re at it, undoing the work of a well-ordered system of self-government and a well-rounded concept of education?

No. The liberal arts take in all three of Adams’s stages of generational studies. That’s why we need them; they contain the record of our civilization, the distillation of the forces that have formed us, backwards and forwards, and side to side. They make self-government possible, as Wood indicates. When these skills disintegrate, so does the country, and we are already seeing that in the murder and mayhem in our streets.

But, as we engage with them honestly, even in the face of hate and destructiveness, we are furthering the sacred work of civilization and we grow in understanding of our own place in history, like General George S. Patton recounting the various conquests that Sicily had endured through millennia as he led the victorious liberating allied armies toward Palermo in 1943 (as shown in the 1970 film Patton starring the great George C. Scott).

In a symposium on the Great Books in an early issue of AQ, Leo Raditsa—writer, editor, critic, St. John’s tutor, polyglot scholar of ancient history—writes of the kind of education we can get from reading the classics and its importance to our situation today, very different from the managerialism of the globalist Davos class.

Raditsa posits that statesmen in the present must be attentive to the past, “to attend to the similarities” among historical events and to be able to comprehend “what is likely to happen if cutthroats are allowed to seize power, crowds are manipulated in the streets, or states violate treaties.” He sees U.S. President Harry Truman as having “had an education that permitted this kind of attentiveness—an education probably acquired in high school and from his own reading.” Raditsa relates an anecdote from the Truman presidency:

On June 23, 1947, defense secretary James Forrestal asked him what the United States would do if the Soviet Union seized Italy and France and moved against Austria. Forrestal made it clear he did not expect such a development, he simply wanted to know the stuff inside Truman.

The president replied that we would have to face that situation when it arose, and he then said that he and General Marshall had been talking about it just prior to lunch. He said that he was afraid the answer would have to be found in history—of the struggle between the Romans and Carthage, between Athens and Sparta, between Alexander the Great and the Persians, between France and England, between England and Germany . . .

Raditsa observes that “Truman got that answer not from experts, not from the latest monographs on international relations, but from Plutarch, and probably from Polybius, from Shakespeare and Churchill, from what we now call general reading, not specialized study.”

According to Raditsa, it takes courage to read the classical historians because “they did not flinch from crises we deny, or ignore,” and he finds most professional historians “too fearful” to learn from them. “But such lessons are what we need to learn,” he insists, “and these books can teach them to us.”

More of such discernment can be found in this issue’s articles:

Is it a “learning disability” or are some students just not studying very much? Richard L. Sparks suggests some answers.

—Cave Speak: The Cacophony About Gender

—What Everyone Should Know About Science—but Doesn’t

Henry H. Bauer cautions that we cannot trust the invocation of “science” as some final word in any dispute.

In the 2022 Isaac Meyers Memorial Lecture in Jewish Classics at Oxford, Daniel Johnson explains how the idea of free speech arose from the religious tradition of the West.

—Defining White Supremacy Up . . . and Academic Freedom Down

David Randall appreciates two prominent conservatives’ analyses of current ills but judges that they don’t go far enough in appreciating the American nation itself, “for its own sake.”

—In Honor of Roger Scruton: Reflections on Beauty and Photography

—Why Americans Destroy Their Own History

—For the Record in this issue features a letter from two scientists to the National Academy of Sciences challenging a faulty decision made decades ago that has been affecting public health ever since.