Peter Wood reviews Stoner, a book for those who persist......

What do we stand to lose if all our books are digital?

In Thomas Hardy’s Tess of the d'Urbervilles, is the encounter between Tess and Alec in the forest rape or seduction?  Why didn't the author tell us one way or another?

Answered by Dr. Carol Iannone, independent scholar and editor-at-large of our journal Academic Questions. Dr. Iannone received her Ph.D. in English literature from SUNY, Stony Brook, and has written widely on cultural and intellectual issues. She has served on the faculty of the Gallitan School of New York University and most recently was the recipient of the National Association of Scholars’ Barry R. Gross Memorial Award.

The first part of this question has been answered here, where I argue that we come out on the side of seduction once we have 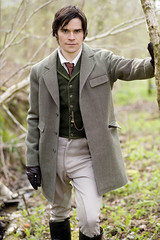 weighed all the evidence. As for the second part, to whatever extent a reader might feel the issue is ambiguous, the reason most likely lies in the challenge the novel presented to the moral standards of the time. The book had a troubled publication history and a controversial reception—hostesses divided their dinner guests into supporters and detractors of Tess—and Hardy made some effort to blunt the edge of his material.

It is an authorial maneuver something like that of those old Hollywood movies in which a clear implication that extra-marital sex has taken place will be undercut in subsequent action or dialogue, thus preserving the audience’s innocence and satisfying the Production Code.

Writing many years before the Code, Hardy labors under an even stricter array of expectations for female behavior. His heroine is essentially good—“A Pure Woman, Faithfully Presented,” as the subtitle goes. She loses her virginity outside of marriage not because she is depraved, but because she is human. Since he wants to challenge his audience with the fact that women too have sexual feelings, he intimates her willing though later regretted surrender. For those readers who might not be able to accept as “pure” a heroine who had succumbed to seduction, however, he hints at force and rape. (Even a woman who had been forcibly raped might well fall outside the pale of decent society at that time, but she would bear less culpability).

In truth, though, some of the ambiguity lies in Hardy himself. He is a kind of cusp novelist, part Charles Dickens, part D.H. Lawrence. His long life (1840-1928) spans the Victorian period to the twentieth century. His characters are often caught between tradition and “the ache of modernism,” as the narrator puts it in Tess.

In this novel, Hardy deploys the melodramatic Victorian seduction and betrayal plot that normally affirms social structures to throw everything into doubt, giving us an unconventional hero, villain, and heroine. The fair, gentlemanly Angel, a conscientious atheist who professes a kind of elevated natural morality, turns out to be full of propriety—a propriety made keener by his very idealism. He turns harsh and unforgiving when he learns on their wedding night of Tess's past. He leaves her for an open-ended sojourn, and during his absence she is forced to undertake hard field labor and endure the humiliation of a woman in uncertain circumstances. The dark reckless seducer Alec, so far from abandoning her according to the usual melodramatic script, becomes devoted and determined—some say overdetermined—to care for her and her family.

And our good heroine Tess idealizes her husband to the point of idolatry and so masochistically absorbs his condemnation of her that the reader begins to repudiate the standard of "purity" by which she has been judged.

In her abandoned state, Tess eventually succumbs to Alec's importunings. She agrees to live with him and to let him care for her family who have fallen on hard times after the death of her father. No sooner have things settled down than a clueless and contrite Angel turns up to reclaim her as his wife, destroying what equilibrium she has managed to establish in her life. In blind despair at being found twice unworthy of her husband, driven to fury at hearing Alec mock him, she seizes a knife from the breakfast table and stabs the man with whom she has been living out of wedlock, killing him.

We remember, as does she, Angel's words to her on their unhappy wedding night, "How can we live together while that man lives, he being your husband in the sight of Nature, if not really?" The purity he demanded of her has driven Tess to distraction, and then to murder.

And although she experiences bliss during the few days she and Angel have together before she is apprehended, she tells him, "I do not wish to outlive your present feeling for me. I would rather not. I would rather be dead and buried when the time comes for you to despise me." She knows that despite his protests he will never be able to accept her. Angel's ideals require not just Alec's doom but hers as well, and lofty sentiments can do as much harm as the raw impulses of men.

They avoid the law for a few days, enjoying the honeymoon they never had, then head north on foot. They stop at Stonehenge to rest, where both pretty much recognize the futility of continued flight. Tess lies down to sleep. Here she is, Hardy seems to say, on a slab at Stonehenge—served up as a sacrifice to conventional ideals of female chastity. Her being hanged sometime later, shocking as it is, is a formality required by the Victorian plot.

And indeed, the Victorian in Hardy wins out, and deeds must have their consequences. Not for him some happy ending that extends leniency to Tess and unites her permanently with her husband in spite of it all. Hardy is too much of a fatalist for that. His aim is to criticize, not to topple the standards of his society and he leaves in place the moral structures he questions. But he recasts them in such a way as to make us almost wish he didn't. And that's his point, I think.

In perfect doublespeak, academicians, policy-makers, and the media insist that authoritarian measures are necessary to ensure freedom....

No Midge, No National Association of Scholars: A Tribute to Midge Decter

Steve Balch reflects on the life of Midge Decter, the "godmother" of the National Association of Scholars, who helped NAS find its footing during its fledgling years....