Peter Wood considers how the higher-education bubble could......

A review of a new book about the Voting Rights Act by NAS Bo......

Thomas Jefferson and Sally Hemings: OF COURSE HE DID IT!

Peter Wood reviews a new scholarly compendium on the relatio...... 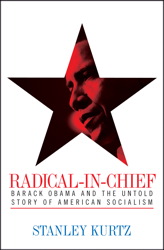 This article was originally published by NAS president Peter Wood in his capacity as a blogger at the Chronicle of Higher Education's Innovations blog.

Stanley Kurtz’s new book, Radical-in-Chief: Barack Obama and the Untold Story of American Socialism, is an important work of scholarship—possibly the most important one on President Obama yet written.

The academic world will probably come late to that recognition. After all, Obama received overwhelming support from the professoriate in the 2008 election and even as the president’s popularity has faded in other quarters, he remains very popular in the academic world. A book that tags him “radical-in-chief” seems an unlikely candidate for a Bancroft Award, or for much of anything other than a dismissive huff from bien-pensant faculty members.

Kurtz’s book will survive the academic cold shoulder. He wrote it, he tells me, with academic historians very much in mind—some 50 or 60 years down the road. Those historians, whatever their political views, will have no choice if they set out to reexamine the presidency of Barack Obama but to build on Kurtz’s foundation. This is because Kurtz took the trouble over the last two years to do something that, astonishingly, neither professional historians or inquisitive journalists have bothered to do. He went into the archives.

His journey took him from the manuscript collections at the Abraham Lincoln Presidential Library to the Wisconsin Historical Society and some two dozen other depositories, perhaps most notably the Harold Washington Archives and the Richard J. Daley Library Special Collections. He also ended up in places where one might not imagine there would be much to be found on President Obama’s past, such as the Sophia Smith Collection, Women’s History Archives at .

I enjoyed an unusual vantage point on the making of this book. Kurtz and I have been friends since college (Haverford ’75). Both of us went on to become social anthropologists, consulted each other on our dissertations and books, and served as each other’s sounding boards as we each chose to leave behind our original vocations. Kurtz, who has a Ph.D. in anthropology from Harvard and whose book on child-rearing in Western India, All the Mothers Are One, is a landmark of psychological anthropology, made a hard decision a decade ago to move to D.C. and reinvent himself as a “public intellectual.”

He was interested at first in the troubles roiling Western ideas of marriage, but his canvas gradually broadened. After 9/11, he took up the question of whether Title VI-funded university “area study” centers were playing fair with their taxpayer financing. He was drawn into national politics, and this culminated in summer 2008 when he became the first person to take serious note of candidate Obama’s long-standing relationship with unrepentant Weather Underground terrorist Bill Ayers.

Pursuing some clues that suggested that there was much more to the story than either Obama or Ayers had admitted, Kurtz sought and received permission to access a key archival collection at the of at . Before he could see the documents, however, the library inexplicably withdrew its permission. Then in response to public pressure, it changed course and allowed Kurtz in. The resulting fuss made national news—and provoked an effort by the Obama campaign in August 2008 to prevent Kurtz from speaking on the Milt Rosenberg radio program.

After that, Kurtz decided that the only way he could have a reasonable chance of following the threads of archival evidence would be to proceed as unobtrusively as possible. Over the next year and a half, he pored over manuscript collections, newspaper morgues, board minutes, official and unofficial correspondence, and the detritus of long-forgotten political campaigns. Of course, all of this is the ordinary grist for scholarly inquiry. Which raised the question: Why wasn’t Kurtz being jostled by other researchers? Why, in fact, was he the first and only researcher ever to examine many of the materials that were sitting there, publicly available, in dozens of archives?

Kurtz worried constantly that he would be scooped. Other people were working on books about Obama’s life before he became a presidential candidate, and some of them commanded resources he couldn’t match. New Yorker editor David Remnick, in particular, was due out with a major book. And when Remnick’s 586-page opus, The Bridge, arrived in April of this year, it was greeted as definitive. One reviewer called it “as exhaustive as a Boswellian recounting.” Yet Remnick had barely grazed the surface of the documents that Kurtz had been finding.

At this point, I don’t wish to weigh in on Kurtz’s thesis, which is that Obama became involved in the socialist movement in 1983 and chose his career as a community organizer accordingly. It is not a simple thing to argue and Kurtz is mindful of the gaps in evidence. The book has a slightly speculative thread woven through a vast amount of documentary evidence. It is possible to imagine that others could read the same evidence and come to different conclusions—which is to say that Radical-in-Chief passes a crucial test of genuine scholarship. It is a deeply documented account that acknowledges its own aporia and invites the reader to consider whether the facts bear any other plausible interpretations.

My point for this blog is simply that Stanley Kurtz’s book ought to be a scandal for higher education. Many of the sources he mined are in university archives and sat untouched by academic historians and scholarly researchers of any sort as the nation elected to the presidency a man who had disclosed next to nothing about his political past. The lack of curiosity among those paid to be curious; the intellectual negligence by those who pride themselves on being exemplars of critical thinking; and the complacency of researchers who couldn’t be bothered to trace an old-fashioned paper trail are breathtaking.

As I said in my last blog about the readiness of scholars to deride the Tea Party movement without troubling themselves to weigh the actual views of its participants, contemporary higher education suffers from surfeit of self-approbation. We could call it political correctness, but that term is stale and not exactly apt. What we have is not so much a willful desire to silence dissenting views as it is a casual assumption that dissenting views don’t matter and can be safely ignored.

A new study published today by the National Association of Scholars, Ideological Intensification, offers an in-depth quantitative analysis of just how far DEI has advanced into STEM fields....

The National Association of Scholars is delighted with Governor Ron DeSantis’ nomination of six education reformers to the Board of Trustees of the New College of Florida....

We believe that Senator Sasse would make an excellent president of the University of Florida, and we urge the Board of Trustees to follow the search committee’s recommendation....

The National Association of Scholars condemns the unrelenting illiberal attacks being levied against Dr. Peterson and against anyone who dares push back against the enemies of intellectual f......