We add another academically solid program to our list.

Do errors and bias distort the findings in a key environme...... 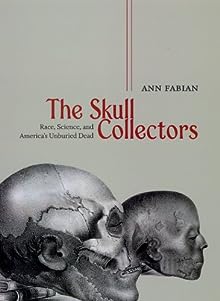 In May 1840, the United States Exploring Expedition captured a Fijian chief, Veidovi, who was reported to have led an ambush of the crew of a commercial ship, the Charles Doggett. More than half a dozen of the ship’s crew had been killed and cannibalized. Seven years later, when William Hudson, captain of the Peacock, threw him in irons, Veidovi blandly admitted his part in the affair. Fijians had been killing and eating foreign sailors for a long time.

American justice, however, required that Veidovi be brought back to the United States for trial—an action that Ann Fabian in her new book The Skull Collectors: Race, Science, and America’s Unburied Dead, likens to “rendition” (in the sense of the U.S. capturing members of Al Qaeda on foreign soil and transporting them across international boundaries):

The Americans had no legal authority to arrest Veidovi, but savage ways lacked standing as a defense in Hudson’s idea of civilized practice.

Fabian (professor of American studies and history at Rutgers) characterizes the capture, Veidovi’s farewells to his people, the gifts the Americans gave to the remaining chiefs, and the promise they made to bring Veidovi back “a better man,” as merely “good colonial theater.” She also casts doubt on the validity of the accusations (“a yarn” told by a dissipated Irish beachcomber) and picks over the discrepancies in the various surviving accounts.

When the U.S. Exploring Expedition finally arrived home in New York Harbor in June 1842, Veidovi was wasting away with tuberculosis. He died two days later. Before he was buried in the Brooklyn Navy Yard, however, someone removed Veidovi’s head, which was preserved for scientific study—and which is still to be found apparently deep within the Smithsonian’s collections. It is this beheading in the name of science that brings Veidovi’s story within the compass of Fabian’s book, a tart and disapproving account of the stumbling efforts of 19th-century scientists to make sense of human diversity by collecting, classifying, and studying skulls.

Readers of Stephan Jay Gould’s The Mismeasure of Man (first published 1981) will recognize the main character in Fabian’s story: Samuel George Morton (1799-1851), the Philadelphia naturalist whose attempts to quantify the cranial volume of skulls from different races were taken up by apologists for slavery. Indignation against Morton is all too easy. His scientific work stands entirely discredited; he appears to have been naïve about the use others would make of his work; he was a cheerleader for the innate superiority of Caucasians; he seems to have been indifferent to the hardships of his black Philadelphia neighbors; and he fostered widespread grave robbing aimed in particular at gathering the remains of American Indians.

The Native American Graves Protection and Repatriation Act (NAGPRA-Public Law, passed in 1990) is a kind of Samuel George Morton Repudiation Statute. In my view, NAGPRA overreaches. It requires the return of human remains that have scant connection or none at all to any living tribe, and it undermines legitimate scientific inquiry. The controversy over Kennewick Man exemplifies the problems with NAGPRA.

Though Ann Fabian can’t resist deploring his work and making fun of Morton, she allows him some modest dignity:

Although historians have condemned his contribution to “scientific racism,” we can credit with contribution to modern methodology. He turned an unwieldy collection of skulls into information he could exchange with collectors, naturalists, and scholars.

Fabian also shows that Morton had a “gift for making and keeping friends;” and that he struggled financially for many years to bring his magnum opus, Crania Americana, to the attention of both the scientific community and the general public. He comes across in this account as intelligent, kind, and rather selfless. In Fabian’s picturing, he is morally obtuse rather than malignant.

Though these allowances take some of the edge off Fabian’s mockery of Morton, I find this kind of history off-putting. It is rooted in the conviction that, since we know better, we can rightly look down on those benighted scholars of yesteryear who ventured down the wrong intellectual paths. Such condescension may not warrant the label hubris, but it partakes of an unearned sense of superiority. Morton started his venture pretty much from scratch, moved by genuine curiosity. He was, of course, a man of his age, and framed his hypotheses within the prevailing concepts—one of which was race.

There is nothing manifestly wrong with Morton’s idea that cranial capacity has something to do with intelligence. The now-well-established model of human evolution shows our species emerging from predecessors with smaller brains. Morton, operating long before the dawn of either Darwinian theory or the modern genetics, groped for explanations of how different populations of humans could differ so much in cranial detail and still belong to the same species. He guessed wrong. He concluded that humanity was made up of several different species.

His error rightly places him on a dead-end branch of anthropology. And yet, like a lot of dead ends in intellectual history, Morton deserves a measure of respect larger I think than Fabian gives him. He asked original questions and spared no effort to find evidence that would help him give authoritative answers. He also produced a masterpiece of sorts. He hired professional artists in Philadelphia to illustrate Crania Americana and the resulting lithographs are strange and sometimes beautiful works of art. Morton was not an academic, but he was surely a scholar, and a more creative and industrious one than most of our kind.

Beating up on someone like Morton seems a cheap sport to me. Fabian is at her best when she avoids the temptation, but all too often she drops in reminders that Morton and his numerous collaborators were callous people and, unlike us,  insensitive to the native’s point of view. Poor Veidovi was a victim of America’s nascent colonialism (though Fiji was never an American colony). Native Americans time and again saw the bodies of the recently deceased mutilated by skull collectors.

This seems terribly sad, but it might help to remember that a good many Native Americans customarily mutilated the bodies of their enemies.

A one-sided version of cultural relativism is at work here. We extend ourselves to see what we suppose is the point of view of the Fijian chief; or Stum-A-Nu, a Chinook Indian; or Walkara, a Paiute chief—whose skulls ended up in various collections. But we decline to extend the same effort of imaginative sympathy to people like Samuel George Morton and Captain William Hudson, who are in some ways even more remote from contemporary sensibilities. After all, we have a law requiring that the remains of Native Americans be returned to their tribes of presumed origin. We have no law protecting the integrity of the scientific collections.

My complaint here is not so much about Fabian’s book. She offers a vivid portrait of the era in which collecting Native American bones became a legitimate scientific enterprise. I am rather noting one more form of that peculiar estrangement from our own civilization’s past that has quietly settled in as the prevailing ethos of the modern university. Call it simply beating up the ancestors, who we all know were ignorant buffoons—except for those who were the victims of ignorant buffoons. There is more than one thing wrong with this. It is itself a kind of grave robbing. We disinter the dead just to make a spectacle of them as exemplars of folly. But on a larger scale, this scorn towards by-gone scholars, failed scientific ventures, and long-retired concepts corrodes the basis of the university itself.

No single generation of scholars owns the university or creates the respect for knowledge that underlies research. Newton famously repeated an old image that, “If I have seen a little further it is by standing on the shoulders of Giants.” The university continues to depend on those giants; but it also depends on the scholars of more ordinary stature who tried something original and, as often as not, failed. We owe them some respect.

This article was originally posted in the Chronicle of Higher Education's Innovations blog.

UPDATED 5/6/21: A repository of 172 administrators, professors, and students who have been "canceled" for expressing views deemed unacceptable by higher education ideologue......