Peter W. Wood writes a letter to the President of Portland S......

An Emeritus Professor Under Siege Once Again

The case of Stuart Hurlbert is a grim reminder that not even......

Unpersuasive book argues that higher education should have a leftist bias

"It reminds me of Don Quixote. Lazere wants his friends to s......

A week ago, a biologist who writes under the blogonym “Agnostic” on a site titled Gene Expression posted a set of graphs showing the decline in use of Marxist, feminist, post-modernist, and psychoanalytic terms in scholarly publications in recent years.   The graphs, Agnostic’s interpretation of them, and his subsequent elaborations are attracting quite a bit of attention.

Agnostic’s method was simple: he just plugged keywords such as “social construction” and “postcolonialism” into JSTOR, the full-text backfile of several hundred journals, and plotted the year-by-year changes in frequency with which the terms appeared in articles. This picked up both positive use of the terms as well as criticisms and thus served as barometer of rising or falling interest.

Well, actually, just falling interest. The graphs generally look like the trajectories of rockets that have run out of fuel: steep assents followed by plummets. 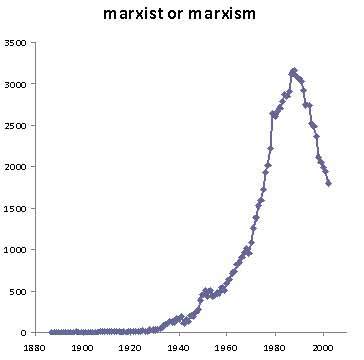 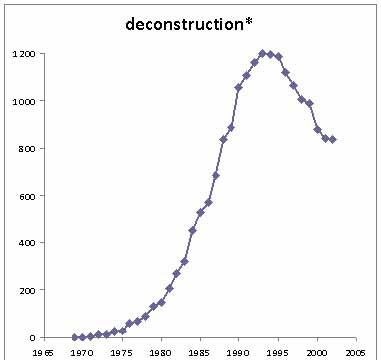 Agnostic’s comments are thought-provoking too. The declines did not all start in the same year, but in the relatively brief stretch from 1992 to 1998, it seems that all the anti-Western ideologies in higher education went into a decline. As the graphs show, there is no precedent for this in older issues of JSTOR journals.   And the decline is equally in evidence for long-standing ideologies such as Marxism and recent ones like postmodernism.

Agnostic, who uses epidemiological metaphors, calls this evidence of “an exogenous shock,” as though a powerful new antibiotic had been introduced.    What exactly that might have been is unclear. The collapse of the Soviet Union? Agnostic mentions the 1995 Sokol affair.   It would be nice to think that the National Association of Scholars played its part as the first nationally organized effort by traditional scholars to critique the illiberal ideologies that had come to dominate higher education.

While these declines are heartening, the graphs make clear that we have a long way to go before the ideologies in question will have sunk to their proper level among the intellectual disciplines, which is somewhere in the vicinity of phrenology or sternomancy.

While Agnostic’s graphs are encouraging, we probably shouldn’t neglect the possibility that other anti-Western ideologies are on the rise. What would happen if we did a JSTOR search on, say, “sustainability”?

The AAMC Prescribes a Daily Dose of DEI

The Association of American Medical Colleges has completely ignored all criticism and has doubled-down on its radical agenda, consequences be damned....