Ayers Has the Right to Speak

Editor’s Note: This article was originally published by The College Fix and is reposted here with permission. 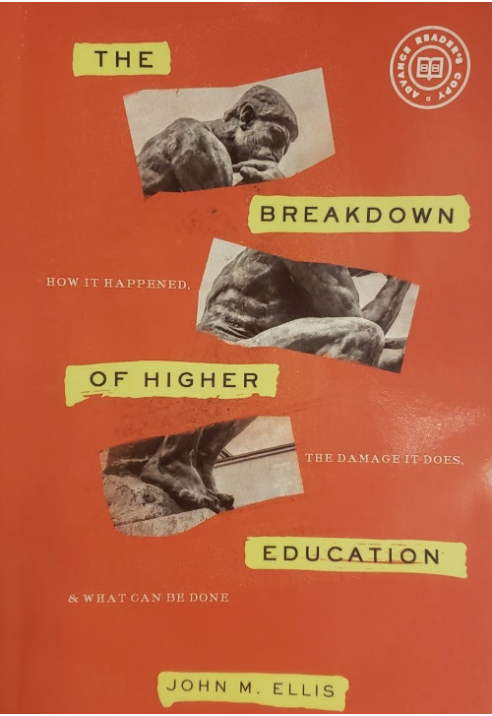 So argues John Ellis in his new book “The Breakdown of Higher Education: How it happened, the damage it does, and what can be done.”

To obtain those seven reform goals, Ellis proposes something of a scorched earth approach. The time for half-measures and calls for reason cannot obtain the necessary results.

What are half-measures? Suggesting token conservative professorships, for one. Ellis, chairman of the California Association of Scholars, dismisses that idea as missing the point — “what we really need is professors who don’t politicize their classrooms in either direction.”

He adds it underestimates the sheer scale of the problem.

“The preponderance of radical faculty is now so great that a few token appointees could not possibly make any serious change in what is happening on the campuses,” writes Ellis, distinguished professor emeritus of German literature at UC Santa Cruz.

Another half-measure is relying on the notion that STEM departments will never be corrupted by identity politics.

Ellis points out that “diversity statements” are already required at most colleges in order to obtain faculty positions, and that includes STEM fields. Making matters worse, there’s already been an erosion in quality scholarship, as documented by the 2018 study by the National Association of Scholars, “The Irreproducibility Crisis in Modern Science,” which highlighted the fact that many supposed scientific results cannot be reliably reproduced. Finally, the science departments themselves have been politicized, as findings that go against so-called settled science are quashed.

Ellis writes that calls urging leftist radical professors who control campuses to see reason and prioritize intellectual diversity are ineffective and pointless, as those professors “achieved control of the campuses by doing exactly the opposite.”

What America is left with is a situation in which “the campuses are controlled by the very people who are the source of the problem” and with that universities “can no longer be reformed from within.”

“Academia cannot be cajoled or persuaded to return to a healthy state. Real change can happen in one way alone: by dismantling, as far as possible, the radical faculty regime. These powerful political clans will have to be broken up and removed. Nothing short of this could possibly restore excellence to higher education,” according to Ellis.

He underscored his point by reiterating it. As draconian as it sounds, and even if people balk, it’s the only way to achieve restoration to the academy.

“Radical activists have rebuilt the academy so that it serves their political purposes,” Ellis writes. “It will continue to do so until we dismantle what they have constructed.”

How so? Lawmakers must step in. They must develop the political will to argue that universities are committing “fraud and embezzlement” by promising to educate young minds and instead subsidizing radical-left politics. Then they must enact reform.

To generate support among the masses for such an undertaking, legislatures must create research reports that spell out the extent to which higher education has been radicalized in their states to educate voters, Ellis suggests.

“The essence of the case to be made is already clear enough: the nation expends great sums of money so that its children can get an advanced education that will prepare them for careers and citizenship, and those vast sums are being hijacked by political radicals to promote their ideology. Accordingly, higher education must be returned to the control of the people who genuinely believe in it. The fact of the misuse of public money by selfish, irresponsible political activists must be at the core of any program of public education,” Ellis writes.

Imagine the red state that actually takes on this challenge, what a boon it could be:

“The word would go out: students can get a first-rate education here and faculty can pursue truth in their fields and debate with their colleagues in a rational way. A state university of that kind would be in a unique position. It would be able to recruit from among all those frustrated scholars working in politicized universities who would be delighted to find a genuine academic workplace again. It might be able to build an outstanding faculty and become the de facto leader of American higher education, whatever the rank it formerly had among the nation’s universities. It could become a standard against which all others are compared because the general public would see a clear example of what it really wants.”

Jennifer Kabbany is Editor at The College Fix.

Read NAS president Peter Wood's remarks on the upcoming Supreme Court cases, which he presented at a meeting of "Oasis," an informal group of academics and intellectuals based in......

We believe that Senator Sasse would make an excellent president of the University of Florida, and we urge the Board of Trustees to follow the search committee’s recommendation....

Is Harvard's all black graduation a benign trend or a step backwards? ...